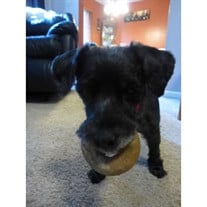 Toto was born on April 29, 1998. Other than that we do not know much about his past. We believe he had a little pug dog for a brother and his owner had to surrender him to ARF at the age of 12. He was brought to Muncie ARF March 2, 2010. We adopted him on June 10, 2010 at the age of 12. He was a wonderful, sweet and loving dog. I had wanted to adopt a senior pet for quite some time. When I found Toto whose name was Bailey on the ARF website in May I really wanted to adopt him. I discussed it with my boyfriend now husband and we agreed we wanted to do it! On June 10th I went to ARF and went straight to Toto's cage. I told them he was the one I wanted and they had me fill out the paper work and with great references I took him home that day! He rode on my lap all the way home. He joined our family of 3 other dogs, his younger brothers were Louis and Caiden and his younger sister was Gucci. When I brought him home his brothers and sister sniffed him up and down! Then he ran around the house and peed everywhere! We knew he was trained, but I guess he was really excited. He loved rolling around in the grass and rubbing up against the furniture. He quickly made himself at home and his place in bed was at our feet. He slept there until he got too old and uncomfortable, then he liked to sleep in the living room by himself. He was my little shadow and I called him that often. He would follow me around the house and even follow me around in circles if that is where I went. He would wait for me outside the shower door and I would have to be careful when I opened it not to hit him with the door. He would patiently wait for me there. He hated to be left and would bark very loudly if he wasn't near me. For a small dog of about 22 pounds he had a deep and loud bark! You would think he was a very large dog if you heard him, but couldn't see him. One time I was painting the kitchen and I had to barricade the dogs in the living room so they could not come into the kitchen and get paint everywhere. I put a little gate up. I was sitting right by the opening of the gate and Toto was right by the opening on the other side, maybe 6 inches from me, but the gate separating us was too much for him and he barked until I took it down. He loved to be with you. He was a shitzu/schnauzer mix. He LOVED Everlasting treats, it was his absolute favorite thing. He would be entertained licking on the Everlasting treats for hours! He loved pupperoni and gravy on his food. He loved bones too. He would just carry them around in his mouth and it was really cute because it looked like a cigar hanging out of his mouth, but he would just carry the bone around with him. He liked to play by me slapping my hand on the ground next to him and him pouncing and chasing my hands. I would sit on the floor and slap my hand on the ground and he would pounce on them and run around me. He liked it when I chased him around doing this. I don't think he was ever held before because picking him up made him very nervous, but I slowly worked with him and he got used to being held. My other nickname for him besides shadow was 'my handsome old man'. I called him this a lot. He was definitely my handsome old man. Besides me and the other dogs, my husband Michael was his pet-Daddy. He loved going to stay with his grandparents and he followed his grandma around at home just like he followed me. He liked going to stay with his other grandparents as well. His body eventually gave out on him, and sadly when he could no longer get himself up and down without help anymore we had to let him go. He went to the rainbow bridge on July 14, 2013. My hope is that he is running around feeling like a puppy playing with other dogs, maybe his pet parent or pug brother from his first home. I hope he is feeling great and very happy. I hope to see him again one day. I hope to play slap with him and watch him enjoy his everlasting treat. I hope that he was happy with us and enjoyed his last golden years at our house. We knew when we adopted a senior pet we wouldn't have long with him, but that didn't make it any easier when he left us. I miss my handsome old man and little shadow. But I hope he is happy and I look forward to seeing him again one day when we meet beyond the rainbow bridge. He will be remembered everyday. He was dearly loved by us.

Toto was born on April 29, 1998. Other than that we do not know much about his past. We believe he had a little pug dog for a brother and his owner had to surrender him to ARF at the age of 12. He was brought to Muncie ARF March 2, 2010. We... View Obituary & Service Information

The family of Toto Clark created this Life Tributes page to make it easy to share your memories.