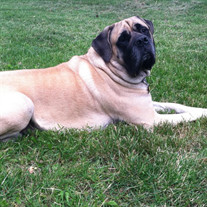 Sir Charles “Charley” Brown Hiday, was born in Anderson, Indiana, to dog parents, Lady Rune of Bolesabode and Ginas Saxon of Bolesabode. He crossed over The Rainbow Bridge on November 9, 2019. His human pet parents, Chris and Jenny Hiday had so many fond memories of their beloved boy, nicknamed Charley Brown and Charley Boy. As his pet dad shared, “Some of my favorite memories of Charley were watching him grow into his legs. His legs were the first to grow and he was so clumsy trying to figure out how to use them! LOL! I also enjoy remembering the time we would go to Mounds State Park, and Charley would play in the river for hours until he was so tired he could barely make it back to the truck.” Chris got Charley when he was 8 weeks old and weighed 12 pounds. He started showing signs of parvo after having him for just two days. Charley spent the next week at the Chesterfield Animal Hospital in the care of Dr. Baker. Charley survived parvo! Chris and Charley lived together until Chris moved in with his wife, Jenny, a couple of years ago. Charley hated other male dogs and couldn’t get along with Jenny’s pack. So Charley moved in with Chris’s parents, John and April Hiday. Charley loved hanging out and protecting his grandma, who also used to dog sit for him when Chris would go out of town. Charley had some very special friends – Ryan, his old roommate; Mary, the next door neighbor, and Mary’s dogs, Sarah, a Golden Retriever, and Abby, a Boxer. Charley’s favorite activities included going next door to Mary’s house to play with his girlfriends, Sarah and Abby. Mary would even make lunch for herself, and share it with Charley, Sarah and Abby. Charley enjoyed listening to his old roommate, Ryan, sing “The Charley-Boy Song”….it was a song that Ryan wrote just for Charley. His least favorite things were anything scary, like a ceiling fan! And how Charley liked to hide any bones around the house. They could be found in the couch, in the recliner, and sometimes in his pet dad’s bed! Charley enjoyed sleeping in bed with his dad. In his later years, he slept right next to his Grandma April. And don’t forget Charley’s favorite food, McDonald’s cheeseburgers with no pickles! He could inhale a cheeseburger and somehow managed to always spit out the pickles on the floor! In addition to his human parents, grandparents and special friends, Charley is survived by human siblings, Amy and David Hiday; and dog siblings, Daisy, Sarge, Nitro and Trucker.

The family of Sir Charles "Charley" Brown Hiday created this Life Tributes page to make it easy to share your memories.