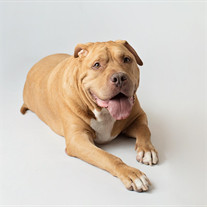 Remy Walker was born on June 6, 2008 from a long line of Camelot pulling champions as "Kabar". Remy was given to an abusive home and forced to pull. When he showed a distaste for the sport and would not perform, the family rehomed him on Craigslist. This is where his happy life began at five months old. Remy rescued his owners on November 11, 2008 and became Walker's Chief Remington, "Remy". After several months of behavioral, obedience, and pet therapy training at Bark Tutor, Remy passed his Canine Good Citizen and American Temperament Testing Society certifications, as well as became a certified therapy dog on November 11, 2009. He donated several hours a week with him mom traveling all over Indiana providing volunteer visits to cheer people up (including soldiers, juvenile detention centers, girl scouts, schools, hospitals, nursing home, universities and too many others to mention), to promote pet safety. and to help children read. Remy loved to dress up in any clothing! His mom stopped allowing him to participate in competitions to give others a chance to win because he won every single competition entered. Remy suffered from Wobbler's Syndrome and overcame the odds of survival. He spent his life as a role model and advocate for Pit Bulls, as well as his last two years of life providing education to veterinary students as a "show and tell" model to help other patients. Late in life, Remy also became a service dog. Remy went to rest with Our Heavenly Father on September 29, 2018 and is survived by his loving parents, Matt and Sam, as well as his two-legged siblings, Felicia, Bryce, Kolbie and Finnley, and his fur brothers, Gus and Tolley. Remy was happy doing whatever his two-leggeds enjoyed and participated in all family vacations. He was a beloved family member and is missed immensely. Rest in peace, sweet handsome boy. You were one-of-a-kind, and no one can ever fill the void you left in your absence. You will forever be my favorite redhead and unconditional best friend. I love you, Mommy

Remy Walker was born on June 6, 2008 from a long line of Camelot pulling champions as "Kabar". Remy was given to an abusive home and forced to pull. When he showed a distaste for the sport and would not perform, the family rehomed him on Craigslist.... View Obituary & Service Information

The family of Remy Walker created this Life Tributes page to make it easy to share your memories.