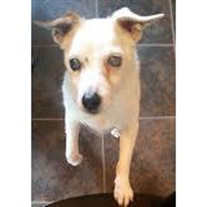 Margaret, Princess of Devonshire &#8211; more affectionately known as Maggie was born in Missouri on July 15, 1997. Weighing 1.2 pounds, Maggie became a part of our family on September 11, 1997. With her Jack Russell heritage, we knew that she... View Obituary & Service Information

The family of Maggie Bargo created this Life Tributes page to make it easy to share your memories.