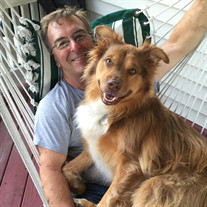 Lilly came to be in the Lebanon, Indiana area in February 2009, born with several brothers and sisters in her litter. They all lost their individual battles to Parvo just a few months after birth. Lilly fought on to be the sole survivor. On her pet parents' youngest daughter's 17th birthday, Lilly came home to be with her loving family and Lil Dan (Danica). She had many special nicknames: Bear, Pooh Bear, Lilly Dog and Sweet Baby Girl. Lilly loved to pay tug-o-war, often wearing out whoever she was playing with! Give her a toy with a squeaker in it, and she would work it over until she got the squeaker out, leaving stuffing all over the place and the squeaker on the floor. If she was having trouble getting it open, she would bring it to you to pay tug-o-war until it would rip. She enjoyed going on walks at Morrow's Meadow in Yorktown, car rides anywhere, and sitting on Brent's lap (her fur dad) for some loving. As Brent shared, "Man, I miss that." Most of all, she enjoyed being around and sleeping with her people! Making beds (actually, unmaking beds) was a specialty, often making every bed in the house for a nap. Lilly was the most affectionate, cuddling dog ever! She didn't care for thunderstorms, gunfire, fireworks, nor the vet's office. On November 15, Lilly passed over The Rainbow Bridge due to a large tumor. Her loving pet parents, Brent and Terri, took Lilly to the vet because she had a hard stomach and incontinence. X-rays showed the large tumor, but not what it was attached to. Exploratory surgery was scheduled to find out if Lilly could be saved. Sadly, the tumor was attached to her liver and had adhered to her intestines; worse, it had cancerous lesions. Her people family were Hanna Cheatham Englert; Brent and Terri Cheatham; Nora Cheatham Wilcox; Grandma Spurling; and Grandma and Grandpa Cheatham. Her pet family included Danica, and later Miley, as sisters, and two cousins, Ranger and Roari. They all loved to play and wrestle until they were worn out, often ending up napping together to recharge for another round. Our Lilly was a very large part of our family who will be sadly missed and forever remembered. The home place is just not the same without her rattling tags and wagging tail coming to greet us. Miss ya soooo much. RIP, my Sweet Baby Girl.

Lilly came to be in the Lebanon, Indiana area in February 2009, born with several brothers and sisters in her litter. They all lost their individual battles to Parvo just a few months after birth. Lilly fought on to be the sole survivor. On... View Obituary & Service Information

The family of Lilly Cheatham created this Life Tributes page to make it easy to share your memories.