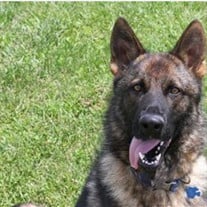 Cody was a special member of our family. His full name was Lakota Kihi Mato, which in Lakota Sioux language translates to Friendly Ally, Able Bear. Cody's mom is a type one brittle diabetic. Cody saved her life many times by waking her when her blood sugar was low. He would scratch, lick, and bark, until his mom got out of bed to get some sugar. If she would not wake up he would alert the other family members by running and barking and leading them to her, so that they could take care of her. Lakota was born on January 21, 2004. We made a long trip to pick him up in Peru, Indiana. He was one of three male puppies, and he was his mom's choice right away. Lakota's birth mom was a trained schutzhund police dog. She was a light tricolor who came directly from Germany. His father was completely black. Lakota was such a beautiful, unique, combination of colors. He was so unsure on the ride home. All the car rides did him good, soon he was jumping in any open door to go for a drive with whoever would take him. The day before he died he was trying like a madman to sneak into his brother Cameron's car for a ride. Cody looked big and scary but he was a big baby who loved to lick, play catch, and chase his brothers Cameron and Nathaniel. He especially loved snowball fights and chasing anyone riding a sled. He hated the vacuum cleaner and the lawn mower and delighted in chasing and biting at them. Cody's place to sleep was on the floor by his mom's side of the bed. He spent every night watching out and waking her when he needed to. When mom got up he would lay on the floor next to wherever she was. He liked to lay right behind my feet when I did dishes. Cody loved to eat. His favorite treats were vanilla double stuff Oreos. He would gladly eat a whole lough of bread. He would dance, sit, roll over, and shake hands to get a treat. He was very smart and could do lots of tricks. Cody will be greatly missed by his dog siblings, Savage, Zippy, PupPup, and Sophie. His best friends were the barn cats and they will miss him the most. His favorite was Sherbert, who he shared his food and water with. He will also be missed by Flower, Herbert, Mouse, Smokey, Nicco, Marshmallow, Spicy, Hop A Long and Chewy. His humans will never forget him. His dad and mom, Jason and Tia, know that there will never be another GSD like him. His brother's Cameron and Nathaniel will never forget how special he was. Lakota left this world by being hit by a car on March 1, 2017. He was 13 years old. So in closing, his family would like to remind everyone to slow down, pay attention, and be careful, whoever is running-is someone's family member.

Cody was a special member of our family. His full name was Lakota Kihi Mato, which in Lakota Sioux language translates to Friendly Ally, Able Bear. Cody's mom is a type one brittle diabetic. Cody saved her life many times by waking her when... View Obituary & Service Information

The family of Lakota Dalley created this Life Tributes page to make it easy to share your memories.

Cody was a special member of our family. His full name was Lakota...