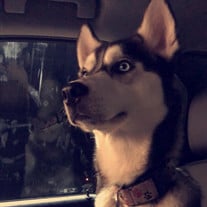 Koko Hope, 2, of Alexandria went to lay on the lap of Jesus and run the endless fields of Heaven on August 28th, 2019 after a tragic accident. Koko was born on May 25th, 2017 in Muncie, Indiana and on August 21st, 2017 she found her forever home when she adopted her Human Dad, Brad Hope, and two older siblings Vamp and Sophia Hope. Koko had many nicknames that she loved: Baby Girl, Momma, Koko-Nuts, Koo-Koo, and her favorite, Kokes. Koko was full of life, personality, and sass; she was energetic, very loving, and incredibly smart. Koko loved to learn and was constantly mastering new tricks, which she loved to show off. Besides sit, stay, and shake, Koko loved to rollover and play dead, give high-fives, “fist” bump, give kisses. For her two latest accomplishments she would play “under arrest” where she would stand up against a wall and let you pat her down, and the other (which was probably her favorite) she would give “hugs”, where she would stand-up, wrap her arms around you, turn her head and lay it on you, and just love on you as long as you would let her. Koko had many activities that she enjoyed doing with her Dad. Her favorite activity was wrestling, she loved to try to pin her Dad down and loved being pinned down so she could escape then pretend to bite, but would make sure to fake sneeze to let you know she was just playing. She loved going for rides in his truck, where she would sit in the passenger seat, just like any human, and want her Dad to hold her paw the entire trip. She loved to stick her head out of the windows, including the sunroof when stopped. Her nose-prints became a permanent mark in her Dad’s truck. During her rides she loved to go to Arby’s because she would always get her own roast beef sandwich and if her friend Stephanie was working, she would always get a little extra roast beef on the side. Koko also loved to visit her great-aunts Sharon Bryant and Jane Hope, and cousin Addison Jefferson on a regular basis. When her Dad and brother would have to go out of town, she enjoyed going with her sister to Happy Dogs in Yorktown to stay and play with new friends and her cousin Taylor Butler. Koko also enjoyed playing with her favorite toy, her Kong Wubba, which she would play tug-of-war, and she would throw it up in the air herself and catch it, but would also let you do the same. Koko loved to dig and get dirty, and always convinced her sister to get dirty with her so she wouldn’t get “in trouble” alone. Koko was always the leader when it came to her and her siblings getting into some sort of mischief. Koko absolutely loved to steal your straw from your drink, and could be extremely stealth about it too! She even learned how to ring the video doorbell, and when she would set it off, she would run and hide. Koko was also a natural born climber and runner, and loved to run as fast as she could every chance she got, and try to climb anything she could. She enjoyed eating Instinct Dog Food with either duck or chicken, and when she ate, she would lay down, and want you to place her bowl in-between her legs so she didn’t have to stand. She also loved to eat things she was not allowed to eat, like the time she got into a delivery box and ate almost 0.5lbs of red Starburst. Koko loved to sleep with her Dad and siblings every night and somehow take up a majority of her Dad’s king-sized bed, but in order to sleep she had to sleep in a “pack” with her siblings, cuddle with her favorite toy, or she wanted her Dad to hold her paw. She occasionally would love to be snuggled by her Dad. Koko’s least favorite thing in the world was taking a bath, and in order for this task to be completed her Dad would have to put on a bathing suit, pick her up while she attempted to weigh herself down, laying on her side, yelling, and then get in the shower with her, where she would vocalize her anger the entire time. She also disliked her Dad’s beard trimmer, and regardless of where it was, high or low, she would find it and destroy it. He’s replaced it at least six times in the last 2 years. When she was mad or upset she would vocally let you know about it, and if you were not looking at her when she was voicing her opinion, she would grab whatever she could and fling it across the room until you paid attention to her. She loved to argue and always had to have the last word. Koko will be remembered as an energetic, loving, smart, sensitive, sassy, and beautiful girl with a gentle soul and the most mesmerizing blue eyes. Koko left her pawprint on the hearts of everyone she met. She lived a short life, but fully lived each day she was given on this Earth. Koko was loved and will be missed by many, especially by her siblings, and her Dad, whom she took a piece of him with her the day she left. Koko’s family would like to thank: Devonshire Veterinarian Clinic, VCA Northwood Animal Hospital, Arby’s on Broadway (Anderson), Happy Dogs, Loose Funeral Home, and Kenny Johnson.

Koko Hope, 2, of Alexandria went to lay on the lap of Jesus and run the endless fields of Heaven on August 28th, 2019 after a tragic accident. Koko was born on May 25th, 2017 in Muncie, Indiana and on August 21st, 2017 she found her forever... View Obituary & Service Information

The family of Koko Hope created this Life Tributes page to make it easy to share your memories.

Koko Hope, 2, of Alexandria went to lay on the lap of Jesus and...