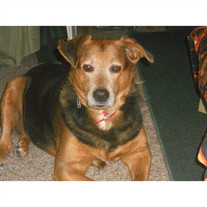 Gentry, also known as "Fat Boy" for obvious reasons became part of our family when he was 5 weeks old. He was born in Kenton, Ohio. It was cold the day we brought him home, and he was so tiny, so I put him in my inside coat pocket to keep him warm for the ride. I think what he loved most were "his people". He was always so unconditionally devoted to his family. He was very protective of "HIS" kids, and they were HIS… His favorite place to sleep was with his sister, Evie. Although, we believe, he secretly wished she would get her own room. Lol. He disliked a messy room. It drove him crazy! He was a clean freak. He was also very prissy and always had to be so proper. He loved to sit pretty and show off. Gentry knew many words and communicated well. He loved to cuddle, on his terms, of course; give and get kisses; and when he wanted you to pet him, he had no problem letting you know by putting his head under your hand and nudging or putting his paw on your hand. He also loved when his Dad Mark would sing to him. He had his own personalized songs and Gentry, would always listen so intently. He even liked to smile big, so you could see his pretty teeth. He did have a jealous side, too. He would whine, cry, bark and jump around when anyone would hug his mom Michelle and say "Aww, Gentry, this is my mom." He was such a good boy. Until he grew older, tennis balls were his favorite toy; but he also loved his "woobie" blankie. He always had a woobie that he chewed on. He never chewed through them, just on them, like a pacifier. He got so mad when we would wash them! Gentry's favorite food was ALL FOOD, except mushrooms!! He was pretty fond of cookies and bacon beggin strips. When we would go for ice cream, he, of course, would get his own. He didn't have a favorite because he loved them all. Gentry is survived by his parents, Mark & Michelle Joseph; human siblings, four sisters, Ashley, Cassie, Evie Jo & Leah; one brother, Brandon, as well as, many family and friends who love him deeply. He touched everyone's heart that he met. He was so fun and has given us many memories. He once tried to play with a skunk who didn't want to play. He lost, of course, and had to stay outside to "air off" for a couple of days. We had almost twelve years of wonderful memories with our guy. Memories that have made us laugh, cry, mad, melted our hearts and most of all, the most true, unconditional, devoted kind of love that only he could have given to us. He will be so terribly missed by so many and forever be in our hearts! R.I.P., Gentry Joseph, until we meet again…..

Gentry, also known as "Fat Boy" for obvious reasons became part of our family when he was 5 weeks old. He was born in Kenton, Ohio. It was cold the day we brought him home, and he was so tiny, so I put him in my inside coat pocket to keep him... View Obituary & Service Information

The family of Gentry Edward Joseph created this Life Tributes page to make it easy to share your memories.