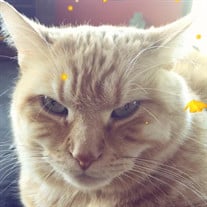 Sherbert Cream Thompson was born approx 12 years ago in Albany, IN. He became a member of our family through a friend who needed to find homes for her cat's kittens. Sherbert was meant to be with us as it was agreed that we would only take a kitten if it was orange. He was the only orange kitten of 3 with the others being black. He was named by his brother Scott and moved to his permanent home in Hartford City, IN. Sherbert answered to many nicknames such as Sherby and Sherbs. He left behind his family (Alison, John, Scott, Damon, Alex, his feline siblings: Blue Falcon, Kiki, Tootsie, and his canine siblings: Dagger and Bullet) who he loved dearly and who dearly loved him. Sherbert's favorite place to be was snuggling on a lap; however, it had to be his decision. More so than not, though, you could barely sit down after returning home that he would be on your lap. He would watch for us in the window and eagerly wait by the door for our arrival. He enjoyed spending the rest of his time eating (and often), napping in the cat beds close to his brother and sister with his distinct snore, play fighting with Blue Falcon, bird watching, and laying in the window. Sherbert had a one-of-a-kind personality that was unusually laid back and loving of all people and animals that is uncommon for most cats. He hardly ever hissed in his life, was patient with small children and dogs, and was a just a sweet, gentle soul. He, however, was not fond of the many kisses he received from his mom, but took them in stride. We will miss the light biting of our toes when he was wasn't being paid enough attention or the greetings at our bedroom doors first thing in the mornings waiting to be fed. Sherbert left this earth much too soon at 3:58 am on September 10th, 2017 surrounded by most of his family after a short battle with an unknown illness. We will forever be grateful for the time we had with our handsome "golden boy" and will cherish the loving memories we will forever hold of him. His sweet soft purr, light meow, and warmth on our laps will be longed for forever more. We love you so much, Sherby, and will be reunited with you again one day.

Sherbert Cream Thompson was born approx 12 years ago in Albany, IN. He became a member of our family through a friend who needed to find homes for her cat's kittens. Sherbert was meant to be with us as it was agreed that we would only take... View Obituary & Service Information

The family of Sherbert Cream Thompson created this Life Tributes page to make it easy to share your memories.

Sherbert Cream Thompson was born approx 12 years ago in Albany,...