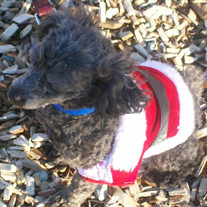 Shadow Ebenezer Adams crossed over the Rainbow Bridge and is now with Grandpops. He was born on February 25, 2004 to Onyx and Eboni both toy poodles and was the runt of the litter weighing under a pound. He fit in the palm of my hand at birth. One nickname was Shadowman, in which he had many songs created for him. One being the old theme song to spiderman the cartoon. He lived a good life for 14 years, 6 months and 3 days having traveled to many places with us during his life. He is greatly missed by his human mom, Terri and human sibling, Taylor, feline siblings Mylo and Baby Bear. Shadow loved to go on car rides and feel the breeze on his nose and the sun on his face. He went everywhere with mom- Canada, Georgia, Kings Island the Halloween, he dressed as Batman, Chicago, even to Prince's Paisley Park and Michael Jackson's childhood home. Shadow also liked to help people in Nursing Homes and has visited many schools in Anderson. He was used for therapy for many. He loved to go on walks and enjoyed going through the drive-thru as he knew he would get whatever we ate. His favorite foods were mom's spaghetti, steak and hot dogs. Shadow would actually give hugs to mom every night. His hugs would be a lean onto my chest, then he would curl up by my toes and go to sleep. Sometimes he would lick my face, if mom had a bad day... he would do both. Humans can learn a lot from dogs. They are forgiving, loyal, and understanding. He didn't care about wealth or poverty. Didn't care about job titles or status. Didn't care about pigmentation. He was man's best friend because he cared about us in a spiritual and loving way, only dogs understand their purpose. His loyalty meant the most to him and us...No matter what... he was there appreciating us. Although dogs cannot speak, they can speak to you in many ways if only you listen to their body language and different bark sounds. Shadow had many expressions and mom understood all of them. FAVORITE MEMORIES OF SHADOW From friends and family * When water fell into his spaghetti plate- he actually looked like he said "Oh man...it's ruined!! Why?" * He made my baby tooth fall out because he chased me up the stairs and I tripped onto my bed. * He would run around the house until he was dry from a bath...he didn't like baths at all. * Shadow howled until mom came home-it drove grandpops crazy. * He annoyed many because he would bark whenever the car door opened and you pulled up to a house. * He rolled his eyes and sighed because his human sister told on him from hiding under the car. * He would growl when you tried to take his toy monkey "Pink" away. * He played cards with us and chose his own cards by pointing with his nose. * Just hanging out watching TV - yes.. he really watched and understood TV. He watched Michael Jackson's Thriller video from beginning to end and was interested the whole time with his ears going up and down. * Growled at the word "Rise" and shoes in his face. * Jumping on Daisy's legs for her to ask "Can Shadow go?" If mom said no, he would jump on her legs again. When he hears okay, he ran excitedly to the door to go with us. * He liked his sweaters in the fall, coats in the winter and raincoats in the spring. Loved Halloween costumes. * Being Santa's helper at Christmas time. He stayed up waiting for Santa and even had a stocking by the chimney. Shadow was considered part of our family and someday we will be together again. Love you Shadow, Miss you!!

Shadow Ebenezer Adams crossed over the Rainbow Bridge and is now with Grandpops. He was born on February 25, 2004 to Onyx and Eboni both toy poodles and was the runt of the litter weighing under a pound. He fit in the palm of my hand at birth.... View Obituary & Service Information

The family of Shadow Ebenezer Adams created this Life Tributes page to make it easy to share your memories.

Shadow Ebenezer Adams crossed over the Rainbow Bridge and is...