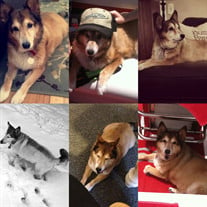 Sams Pet Parents Are Rob & Mary Althouse. He had a few nicknames such as Sam, Samuel Jay, Bubby, Baja Sam and many more.Sams siblings were Lexi Lil sis, Chelsea Big sis, Gordon the cat, and the hamsters and fish he grew up with.His favorite food was cheese and popcorn and his favorite activities were to sleep, chase dad, beg for human food, boating, following momma.Favorite touys were all the toys in his toy tin, especially Ellie and Foxy Loxy, who were both put to rest with him. He was the most loyal, loving dog to our family. He got so much attention, and we loved giving it to him! The girls looked forward to seeing him when they came home from school, and sometimes, I think they drove him nuts! But he loved it anyway. Anyone who visited absolutely adored him. He enriched our lives in so many ways, and helped us appreciate the little things. Dad would rub his belly and his tail would just sway. He was the brother of the girls, a pet who we could all confide in and trust. We talked to him every day..calling him handsome, good, sweet, ornery, and never forgetting to say "I love you." We were such proud owners of our beautiful pupper dog, and we couldn't have asked for a smarter, more comforting companion. Leaving him alone was never easy, but he waited patiently on us to walk through the front door, where his happy face and wagging tail greeted us. Whenever Lex was at college, he would lay by her door. We looked forward to coming home and yelling "Sam!" through the house, waiting to hear his jingly collar and nails against the floor as he came running. His kisses healed a broken heart. We wanted the best for him, and that's what he got. The fella was a fighter, that's for sure. His family was everything and to us, so was he. Thank you bubby, for being the best dog ever. Favorite Memories: Lexi taught Sam how to sit, shake, and walk up and down the stairs by bribery with many treats. Sam was SO stubborn when we left--he wouldn't give kisses or go potty. He would get loose and then come back home when we showed cheese. He LOVED going boating at the Mississinewa Reservoir, and going fast on the boat! When we picked him up at the kennel, he would jump on everyone, even strangers. Once he broke the bracelet Lex got in Florida, and she didn't care at all : Lexi took him to "Show and Tell Day" at school, and hosted birthday parties for him where he would eat tons of "cake" made out of wet dog food. She invited all the neighbors and their pets! Getting attached to Chels when she took care of him while mom and dad were at work and Lex was at college. When we picked him up for the first time, he was so scared, especially of dad. But mom looked at him and said "We have to take this one." When dad would stand up for Sam if anyone ever yelled or at accused him of being anything but the best dog. Lexi sharing Popsicles with him. Aunt Missy calling him "chemo dog" when mom shaved him for the first time, haha! Running alongside the fence with Kirby in the backyard. Hearing a sound, barking crazily to go outside, and flying off the deck to bark at whatever he heard. Sam didn't like closed doors--he would scratch and bark until you opened it, and then walk away.

Sams Pet Parents Are Rob & Mary Althouse. He had a few nicknames such as Sam, Samuel Jay, Bubby, Baja Sam and many more.Sams siblings were Lexi Lil sis, Chelsea Big sis, Gordon the cat, and the hamsters and fish he grew up with.His favorite... View Obituary & Service Information

The family of Sammy Althouse created this Life Tributes page to make it easy to share your memories.

Sams Pet Parents Are Rob &amp; Mary Althouse. He had a few nicknames...