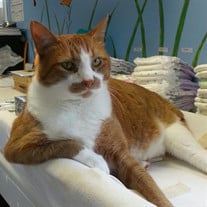 Rosie Andrew Palmer (nicknamed Rose, Son, ManCat and Palmer) was born in Fortville, Indiana, to pet parents Tory Vire (mom), Ben Wolfe (dad) and Erica Cyman (grandmother). He had a host of favorite activities: being a kitchen helper and asking for smidgens of his favorite foods; chasing and biting his grandmother for fun; showing off his lightning stripe on his arm and his mole on his bottom lip; licking and styling his human brother's hair; surely setting a record for being the loudest purring and most sociable cat in the state of Indiana; smelling tires on our vehicles so he'd know where we had been; healing us when we were sick; demanding his food bowls always be filled to the brim; stealing his cat brother's rabbits/mice and eating them; sunning himself on the porch; cuddling; having his picture taken; sitting on the golf cart; and being the "Most Interesting Orange Mancat" in all of the world! His least favorite thing was seeing other "stranger" cats outside. Among his favorite toys were Barbie shoes; milk bottle caps and rings; catnip-sprayed mice and mancaves. Rosie liked a variety of foods, including chicken stir fry; cheese; hot Cheetos; Cheez-Its, ice cream and tuna. His couch in the den and his chair on the front porch were favorite sleeping places. Rosie's family shared some of their most favorite memories....Rosie's excitement over Christmas (the fresh-cut tree, opening presents, and his CHRRIIIST-mas food); listening to music, especially Fetty Wap; laying with his "straight legs"; laying by the fire; coming out to greet us when we would get home and sometimes climbing up in our vehicles; running as fast as he could from the barn up to the house; rubbing on our chins when we held him; his sixth sense when it came to storms (he would always get on the interior wall of the house, just like the weatherman instructed when a storm was brewing); the "losing of the tail" incident; and his ability to have true back and forth conversations with his family. Besides his pet parents and pet grandmother, Rosie is survived by his human and pet siblings, Gavin Swinford, Grayman, Stuart, Lemen, Honey, Badger and Coon. Other family and friends include Lisa Harlow (Mammy); Mark Swinford; and all of his Daycare children. Rosie was preceded in death by his orange cat sister, Adrienne, and his orange cat nephew, Sid.

The family of Rosie Andrew Palmer created this Life Tributes page to make it easy to share your memories.