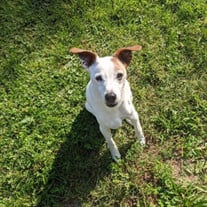 Petey was born February 17, 2007 and was adopted in late April 2007 from Happy Tails Rescue in Milan, Indiana. He died Sunday, April 11, 2021, after a brief, brave battle with a rare and aggressive cancer. He was known by his rescuer as Tater Tot and by family and friends as Baby Angel, Beyboo, Bear, Bresh, DollDoll, Gottagoo, Little Man, Mom's Boyfriend, Muhama Dolly, Pal, Precious, Salvador Dolly, and Yub. His favorite toys, Froggie, Grape Ape, and Beebee are sitting idle. His peanut butter jar is sadly full. His harness and leash are put away. Stink Pink, his favorite blankie, is now being treasured by K.C. and Petey's sister. No more will he have to endure treatments, take medications, or go to the vet. His walks are greatly missed. His joyous incessant bark is silenced. His gorgeous pictures and videos show the good life he lived. Many stories have been retold – the way he would look up if he heard a plane,... the way he woke people up at the dawn of each day,... day a butterfly landed on his tail,... when he asked K.C. to remove the tiny chew string from his eye and went back to play,... how many times K.C. would patch up sores he'd licked on his legs so the family wouldn't worry,.... how the area around his eye on the white side of his face would get red because he was tired,... the way he would slide down furniture when he was a pup and go flying end over end at the retorts of his sister. The family cannot hear thunder or a firecracker without thinking of him. Mostly though, the huge memory is the way he and mama Jo Ann loved each other. Jo Ann preceded him in death and it is certain she is holding him again now, inseparable forever. Surviving are his adopted sister, Carly Idgie “Cart” Gardner, and parents K.C., Lisa, and Nick Gardner, special friend Briana Reichart, and a slew of admirers near and far, his beauty and grace being so well known. K.C. often said, “You're welcome, world,” upon letting Petey outside in the morning. So, you're welcome Heaven, one of your own.

Petey was born February 17, 2007 and was adopted in late April 2007 from Happy Tails Rescue in Milan, Indiana. He died Sunday, April 11, 2021, after a brief, brave battle with a rare and aggressive cancer. He was known by his rescuer as Tater... View Obituary & Service Information

The family of Petey Jack "Bobo" Gardner created this Life Tributes page to make it easy to share your memories.