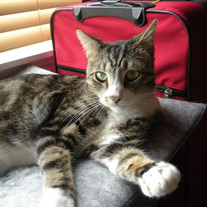 Oliver was born in 2009.He passed away July 16, 2019,in Muncie, IN. He was adopted by his family on March 17, 2012 from a shelter in Aurora, IL after they read his sad story on Petfinder about his being found abandoned in an apartment all alone after his first owners moved and left him. Oliver settled into his new home happily with his Mom, Sally, Dad, Chuck, sister Kaitlyn, and cat sister Sasha. Oliver knew no strangers. He loved everyone, and even people who don't generally like cats loved Oliver. Sasha was always the queen of the household, and Oliver was happy to let her be.Whenever anyone came to the door, Sasha would run and hide and Oliver would run to the door to greet who ever was there.He was very affectionate and loved to give nose kisses. Oliver never liked feeling cold. In the winter, he'd hang out where there was heat, including his favorite spot on earth, snuggled in Dad's lap right next to Dad's laptop, staying warm. Even though Sasha wouldn't ever cuddle with Oliver, they would play together, especially their favorite game of chase. They would nap next to each other, and Sasha would happily allow Oliver to bathe her. In 2014, Oliver moved from Oswego,IL to Muncie, IN, his Dad's hometown. Oliver didn't care, as long as he was with his family. He and Sasha loved to watch the squirrels and birds from the living room window, and also the bedroom windows. Oliver also loved wet food and treats.He always waited on the foyer rug for his family members to come home He was loyal, much like a dog is. Oliver was always a large cat with a large appetite,so when he lost weight in the fall of 2018, his Parents were concerned. He was diagnosed with kidney disease and told he could last a short time, or a long time, but it was totally unknown.Oliver had trouble maintaining his weight, but in the months after his diagnosis, he seemed to be doing well. He acted normal, eating, playing, and being his loving self. Then on July 14th, Oliver lay down in the closet. He didn't seem to be himself, and didn't feel like eating. Mom took him to the Vet on July 16th and he was found to have organs shutting down and was very pale and jaundiced. Oliver was very sick, and the difficult decision was made to let him go. Mom and Dad stayed with Oliver until the very end. Oliver will always be with his family in his Urn. He leaves his heartbroken family, and the world is a darker place without Oliver. Oliver's Mom Sally is from Maine, and his Dad is from Muncie. If anyone wishes to give a gift in Memory of Oliver, please consider making a donation to Forgotten Felines of Maine, or Muncie ARF.

Oliver was born in 2009.He passed away July 16, 2019,in Muncie, IN. He was adopted by his family on March 17, 2012 from a shelter in Aurora, IL after they read his sad story on Petfinder about his being found abandoned in an apartment all... View Obituary & Service Information

The family of Oliver Jamieson created this Life Tributes page to make it easy to share your memories.