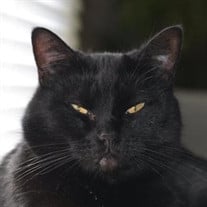 Mistofela Fluff “Miss Fluff” Feral 2004?-April 16, 2019 Muncie—Miss Fluff, also known by many other nicknames, including Pickles and The Known Flight Risk, had her reign ended by cancer on April 16, 2019–thirteen years to the day after her ‘parents’ first met and she met her ‘mom’. This Bombay cat was born under a broken-down car in a former backyard in downtown Muncie. The sole survivor of her litter, she grew to be Head Cat in her feral colony of up to 20 cats. In November 2006, she decided that she had enough of the hard life and leapt into an incoming basket of dirty laundry. The rest is history. She remained as Supreme Overlord to her two “thumbs”, Dave and Jamie-Sue Ferrell from then on. Along the way, Miss Fluff had fellow cats in her home, including David-Cat (deceased in 2015) and Rudyard Roxbury “Rudy/Rory”. She will be missed greatly by her humans who saw her more as a daughter than a pet, her housemate Rudy/Rory, and friends Susie and Janel Peterson as well as their cat Gilbert and ‘dawgs’ Pepper and Cole. Miss Fluff had quite a social media purr-essence as well. Preceding her in death are her partner Tawnzer (aka Sylvester), her ‘grandfather’ Luke Ferrell and his ‘dawg’ the Cinna-pup (who preceded her as Supreme Overlord) as well the many cats of her Porch, including Grim Reaper and Topaz. She was quite the example of her breed: vocalizing, befriending, and living in community with her humans. She was one to get her way most of the time, especially when a dairy product was involved. Warm sour cream from Dave’s Taco Bell taco supremes were a favorite source of contention, as well as Riggins’ French Onion Dip. Jars of peanut butter quaked in fear. Miss Fluff loved watching the vegetable garden grow, quality controlling the incoming catnip crop, and taking in petrichor after any amount of rain. She also preferred front windows so the world would know who she was and where she lived. Several neighborhoods have been graced by her face. She had a love of pipe and drum music, with a particular place in her heart for “Scotland, the Brave.” Her family wishes to thank Drs Boyce and Litt as well as the staff at Boyce Animal Hospital for their care of Miss Fluff. Loyal and True in Anderson were entrusted with her final wishes. She was cremated an will be interred in a clean pickle jar. Donations in her memory can be made to ARF, 1209 W Riggin Rd, Muncie, IN 47303, where David-Cat was adopted from and cared for via the Arlo Fund.

The family of Mistofela Fluff Ferrell created this Life Tributes page to make it easy to share your memories.