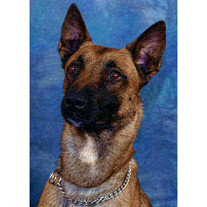 Magnum Jarrett, died August 20, 2012 from injuries sustained while in the line of duty. He was born July 27, 2009 in Holland, was purchased in February of 2011 at Shallow Creek Kennels in Pennsylvania, and was certified through the North American... View Obituary & Service Information

The family of Magnum Jarrett created this Life Tributes page to make it easy to share your memories.