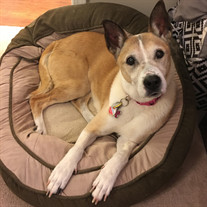 Lola Poulos passed away suddenly and unexpectedly on March 15, 2018. We adopted Lola in February 2008 from the Humane Society of Hamilton County. The vet estimated that she was approximately one year old at that time, so she was approximately 11 years old at the time of her death. Lola was known for her iron stomach. She would eat just about anything. After we had had her for only about six weeks, Lola ate about two-thirds of a chocolate cake, along with some toothpicks and aluminum foil…and miraculously survived. She also ate Ugg wool slippers, stuffed animals, and Ziploc bags. A few summers ago, Lola ate a large amount of mulch and had to be hospitalized for a few days due to an intestinal blockage. It was touch-and-go for awhile. She was very fortunate to not require surgery and for the blockage to resolve itself. Needless to say, Lola had a very strong constitution. Lola was the best dog and such an outstanding companion. She was always so sweet, loyal, cuddly, and excited to see us. She had a sixth sense about her and knew just when we needed a hug or cuddle time on the couch or in bed. Lola was not the most well trained dog, but she knew the commands “sit,” “lay down,” “stay,” “come,” and “down.” She loved car rides, walks around the neighborhood, walks at Forest Park in Noblesville, and visits to the Fishers Bark Park in her younger years. Being a hound dog, Lola loved to run, and she took advantage of any chance she got to “run away” from home. We recall several occasions where we chased her either on foot or in the car. Lola was smart and often found her way back home on her own. Up until the last day of her life, Lola was very vivacious and playful. People often commented on how she seemed “puppy-like.” She was a puppy at heart and always knew how to have fun. Lola was doing what she loved most when she passed away. She was sunbathing in the back yard on a beautiful, sunny day. She died peacefully and did not suffer, for which we are very thankful. Lola leaves behind her human mom, Darcy, her human dad, Mike, and her two human brothers, Isaac (age 7) and Enzo (age 5). In the last couple of years, Isaac and Enzo grew very close to Lola. They enjoyed helping to feed her and take her for family walks in the neighborhood. We said a prayer for Lola and shared some special thoughts with her. My older son, Isaac, said this to Lola, “I hope I get to see you in Heaven one day. You were the best dog anyone could ever have.” Truer words have not been spoken. Lola will be dearly missed by her family, but we will forever hold on to the sweet memories that we have of our precious time spent with her

Lola Poulos passed away suddenly and unexpectedly on March 15, 2018. We adopted Lola in February 2008 from the Humane Society of Hamilton County. The vet estimated that she was approximately one year old at that time, so she was approximately... View Obituary & Service Information

The family of Lola Poulos created this Life Tributes page to make it easy to share your memories.

Lola Poulos passed away suddenly and unexpectedly on March 15,...