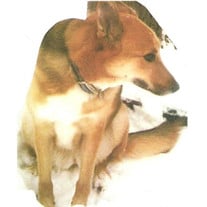 Jodie, beloved canine companion, passed away March 15, 2010 at the age of 17.5 years. She was born September 28, 1992, in Madison County. Jodie was also fondly known as "Jo Jo", "Miss Jodie", "Sissy", "Little Sister", and "Bummer". Some of Jodie's many joys included riding in the truck, taking walks, chasing squirrels, rabbits, and cats, digging up her blankets, and digging holes. She was not fond of taking a bath, trips to the vet, having her nails trimmed, or being home alone. Jodie had several special places she slept including her bed, the hallway, and in her bedroom. Jodie ate whatever "Mommy" was eating and she ate well. Some of her favorite foods were soft tacos from Taco Bell, cheesburgers from McDonald's, and lots of other "people food". People commented on Jodie's beauty everywhere she went. Some of Jodie's favorite times were spent taking trips to Grandma's house and Aunt Terri's house, and going camping, especially Fathers' Day camping trips at Grandpa's. Jodie is survived by her loving mommy, Darla Hartley; her daddy; Grammy, Mary McMillen; Grandpa, Earl Hartley; Aunt Terri, and several other aunts. Jodie will be dearly missed by all those whose lives she touched.

The family of Jodie Hartley created this Life Tributes page to make it easy to share your memories.