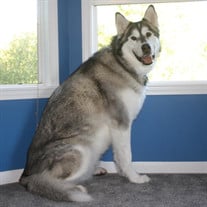 Hamilton Smith – The Big Snow Hamilton was a mutant Malamute dire wolf. Some of his names were The Big Snow, Snowy, The Dog in the North, and Wolfy Face. He was more than six feet tall, when taking a cookie from the top of my head, and 170 pounds. Often on walks people looked at him like he escaped from a mythological zoo. They would stop us to meet him, photograph him, and ask “Is he a good boy?”. My reply was always the same. “Of course he was. He’s so much bigger, stronger, and sharper than me; I couldn’t make him do anything he didn’t want to do.” He was an enormous sweetheart, so making him do something; or stopping him from doing something was never really an issue. We were infinitely lucky he found us from the Northern Lights Sled Dog rescue. We treated him like the king that he was (we always treat our dogs royally). Despite his size, he wasn’t a big eater. He was stressed when we brought him home, and we were stressed because he didn’t seem to eat enough for the large guy that he was. His first big meal was a smoked turkey my mom had made. He seemed reluctant at first, but realized it was ‘ok’; then he dove in. After he started eating, his new attitude became, whenever I ate, “What are we eating?”, as he put his giant paw on the table. Despite our invitations, he also was reluctant to get on the couch or in the bed. He never really spent much time on couches, because he just didn’t fit, but he became a regular bed lounger. He was a notorious digger. Loved the snow, walks, and walks in the snow most of all. He was extremely pack protective, and quiet. He was always waiting for his next walk, and normally got at least 3 ‘patrols’ per day. He loved the quiet and rarely barked. His brushed out fur provided luxury nest material for birds and squirrels. A dog toy wasn’t created he couldn’t quickly destroy. He tolerated/liked ‘fighting’ with his little big friend Milo. Sometimes he would get too excited about something outside. He would rise up and pound a window, but only cracked one. The best part of most of my days was the time we spent walking together. The three month fight against his aggressive osteo sarcoma and his loss has crippled us with grief. We exhausted multiple veterinarians, surgeons, and an oncologist trying to find a way to save him. It was a failure. At that point, we found ways to treat him even more like a king; “A King of Kings” for the time we had left with him. We walked as many times a day as he wanted to (and could), any time of the day or night. He liked a window open at night, so even in December, the bedroom window was open. His diet became sirloin burgers, turkey, salmon, hot dogs, cheese, ice cream, anything we could get him to keep him eating. We miss him so much and will continue to do so for the rest of our days. The rescue who saved him for us had a quote on the memorial page of their calendar that really hurts me to read right now. “Where did all the days go?”

Hamilton Smith &#8211; The Big Snow Hamilton was a mutant Malamute dire wolf. Some of his names were The Big Snow, Snowy, The Dog in the North, and Wolfy Face. He was more than six feet tall, when taking a cookie from the top of my head, and... View Obituary & Service Information

The family of Hamilton Smith created this Life Tributes page to make it easy to share your memories.

Hamilton Smith – The Big Snow
Hamilton was a mutant Malamute...