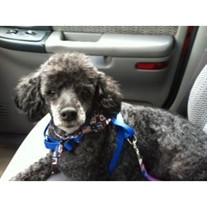 Elliott Marsh was born sometime between 2000 and 2001, we think, and not much is known about his first 12 years, of life. He was brought to the Muncie Animal Shelter as a stray in the winter of 2012. Elliott was rescued from the shelter in January of 2013 and brought to ARF in January of 2013. Elliott soon settled into his daily routine as a resident of ARF, and in the Spring of 2013, he officially became the "Adoption Center Greeter"! As a volunteer with ARF, I saw Elliott often and I made the decision in June of 2013 to bring him home with me and introduce him to the rest of my fur kids. From that first day in his new home, you would have thought Elliott had lived with us forever! Our other rescue, all from ARF, dogs accepted him as one of their own right from the start, and Elliott blossomed into a happy, playful little guy. He loved to grab one of his stuffed toys and shake it vigorously! Elliott was deaf and had large cataracts on both eyes, but that didn't stop him for a minute. He would run into the back yard with the other dogs and would bark as if to tell everyone, "hey look at me!" Through a routine exam, it was discovered that Elliott had a slower, than normal heartbeat, but after further x-rays and an EKG, we learned that his condition was not life threatening or didn't require medication at this point. With this good news, we breathed a sigh of relief feeling reassured that Elliott would be with us for a few more years. I made it a point to hold this sweet little man close to my heart and kiss his cheeks many times a day, telling him how much Mommy loved him. I felt that I needed to try to " make up" for the love that he obviously had missed out on during most of his life. In late July, Elliott got to take his first vacation to Myrtle Beach, South Carolina to meet his human brother, sister in law, and their two fur kids. Elliott had a ball, and was a wonderful traveler, and I loved watching him explore all of the new things around him. When we returned from vacation, Elliott was so happy to be home, running, playing with toys, and barking outside to let everyone know that he was home! Four days later, Elliott didn't act like himself and didn't want to eat or drink, since it was a Sunday and assuming that he maybe had a stomach virus, I decided to wait until Monday to call the vet. After examining Elliott, and giving him some medication, the doctor sent him home and told me to let him know in a couple of days how Elliott was feeling. Little did I know, but Elliott didn't have a couple of days left on this earth. The next morning, out of no where, Elliott's condition got worse and as I picked him up to cuddle him, I noticed that his skin and eyes were severely jaundiced. After rushing him to the vet and getting blood work done, we found out that Elliott was in the last stages of liver failure, there was no treatment available and he was in pain. We had to make the painful decision to let our precious boy go to the Rainbow Bridge on August 6, 2013. Elliott only had seven weeks with us, but no one has ever been loved more than we loved Elliott. He was our special boy, and he is sadly missed everyday by his Mom, Dad, human brother and sisters, and his doggie brothers and sisters. Elliott will never be forgotten and I know that one day, my boy will be there to meet me and we will cross the bridge together!

Elliott Marsh was born sometime between 2000 and 2001, we think, and not much is known about his first 12 years, of life. He was brought to the Muncie Animal Shelter as a stray in the winter of 2012. Elliott was rescued from the shelter in January... View Obituary & Service Information

The family of Elliott Marsh created this Life Tributes page to make it easy to share your memories.