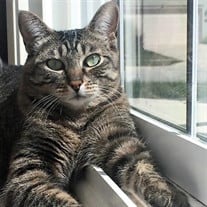 Chloe Hildebrand, beloved fur baby of Alison, Sean and Juliette Hildebrand, crossed over the Rainbow Bridge on January 25, 2021. Chloe was so special in every way. She was born in Seattle, Washington, on December 19, 2010, and had traveled around a lot, from Seattle to New York City, and then to Indiana, where she passed away. I adopted her on August 7, 2011, and we lived together until moving to New York City where she met her human dad, Sean. We would frequently call her Chloe Monster. She carried around a bluish-pink peacock which was her favorite. We would, many times, know that it was the peacock she had because she would howl whenever she had it in her mouth. She also had a stick that she liked to carry around with her as well, up and down the stairs and around the house. She LOVED Temptation Treats, and one time when we went away on vacation, we came back to the bag being ripped open by her. She was so quick with grabbing the treats. She also loved to sleep by warmth, be it the fireplace, radiator, or heated window perch. Her favorite places to sleep were on the bed, or under the bed. She also loved to sleep under the dining room table on the chairs. She loved to be under things because she was skittish and afraid, and it allowed her to feel safe. She didn't like a lot of noise and preferred peace and quiet. Her human sibling was Juliette (18 months old), however, she never really became close with Juliette, as she was afraid of her and skittish with people she didn't know well. But once she got to know you, she warmed up and was the most affectionate little creature. She frequently liked to cuddle up and sleep in-between her pet parents, Alison and Sean. For such a tiny little kitty, she had the loudest purr. She also liked to paw at her human dad (Sean) and try to get his attention. Her absolute favorite food was Chick-fil-A. In fact, as soon as we would get it, it was like she would smell it, because she would run to us right away. She loved human food and cat food as well. She also loved bacon. We have so many fond memories of her that we will miss greatly -- she was the sweetest kitty and she had so much love in her heart and was so affectionate. I will miss her sunbathing at the window, and jumping up on the bed with me when I was resting. She is also survived by her feline siblings Mia (age 12) and Kappi (age 4). We all miss you, Chloe, and love you, and know we will be reunited again someday.

Chloe Hildebrand, beloved fur baby of Alison, Sean and Juliette Hildebrand, crossed over the Rainbow Bridge on January 25, 2021. Chloe was so special in every way. She was born in Seattle, Washington, on December 19, 2010, and had traveled... View Obituary & Service Information

The family of Chloe Hildebrand created this Life Tributes page to make it easy to share your memories.