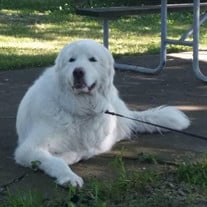 Bear passed away on January 26, 2019 surrounded by his loving family. Bear was a Great Pyrenees found wandering in the woods of Alabama when he was a puppy. After no one claimed him, he was scheduled to be euthanized in October 2007 at an animal shelter in Alabama. Fortunately, a local rescue group Furry Friends was able to save him from an early death. Furry friends posted him on the internet the next day, where his forever Mom and Dad immediately saw him. A week later Bear was in Florida with his new family. He was given a birthday of 12/29/2006 by the rescue group. Bear lived with his Daddy, Mommy, and two Sisters. He was preceded in death by his fur brother Rikki. In 2013 Bear and his family moved to Anderson, Indiana to be closer to family. Bear loved the cooler weather. The first time he saw snow he came alive like never before. His Mom and Dad knew they made the right decision for Bear to move to Indiana. Every winter since 2013, when the first snow would fall, all Bear’s Mom would say is “snow” and Bear would perk up his ears and run to the back door to go out. Bear loved to play with little dogs like toy poodles and chihuahuas. Big dogs his size seemed to intimidate him. He loved his human sister Madison who was two when Bear became part of the family. They were best friends. The last few years Bear was a great companion for his Daddy when he retired. His Dad always said he was a good listener, who never cut him off when he was talking or talked back. Every night before treat time, Bear would snuggle up to his Mommy for his daily kisses and hugs. The morning Bear crossed over the Rainbow Bridge, it started snowing. Bear went outside and just stood letting the snow fall on his face and licking at it now and then. After a couple of minutes, he turned around and came back into the house. Twenty minutes later he passed and at the same time the snow stopped. Bear you will be missed by your family and all who met you. I doubt we will ever find another companion who is as loyal and smart as you. You will forever hold a place in our hearts. Until we get to heaven and see you again, run free and play pain free Mommy’s baby.

Bear passed away on January 26, 2019 surrounded by his loving family. Bear was a Great Pyrenees found wandering in the woods of Alabama when he was a puppy. After no one claimed him, he was scheduled to be euthanized in October 2007 at an animal... View Obituary & Service Information

The family of Bear Ellington created this Life Tributes page to make it easy to share your memories.